“Full access to someone’s phone is essentially full access to someone’s mind” the words of Eva Galperin, Director of Cybersecurity at the Electronic Frontier Foundation. She’s talking about the scourge of stalkerware, increasingly popular apps that are being used by non-technical individuals to silently monitor a victim’s phone.

Get your privacy back. Detect and remove iPhone stalkerware with the award-winning Certo AntiSpy.

What is iPhone Stalkerware?

Stalkerware, also known as spouseware, is the name given to a class of spyware that is commonly used by domestic abusers and angry exes to spy on their victim’s iPhone and gain access to private information. These spy apps give stalkers access to a huge amount personal data, including messages, photos, GPS location and some can even turn on your microphone and listen in.

Stalkerware apps like FlexiSpy, mSpy and HelloSpy are readily available to anyone for as little as $14.99 and are often explicitly marketed as a way to catch a cheating husband or wife in the act.

Would-be cyber stalkers don’t need to look very hard to find these intrusive apps, with adverts even starting to appear on Twitter recently: 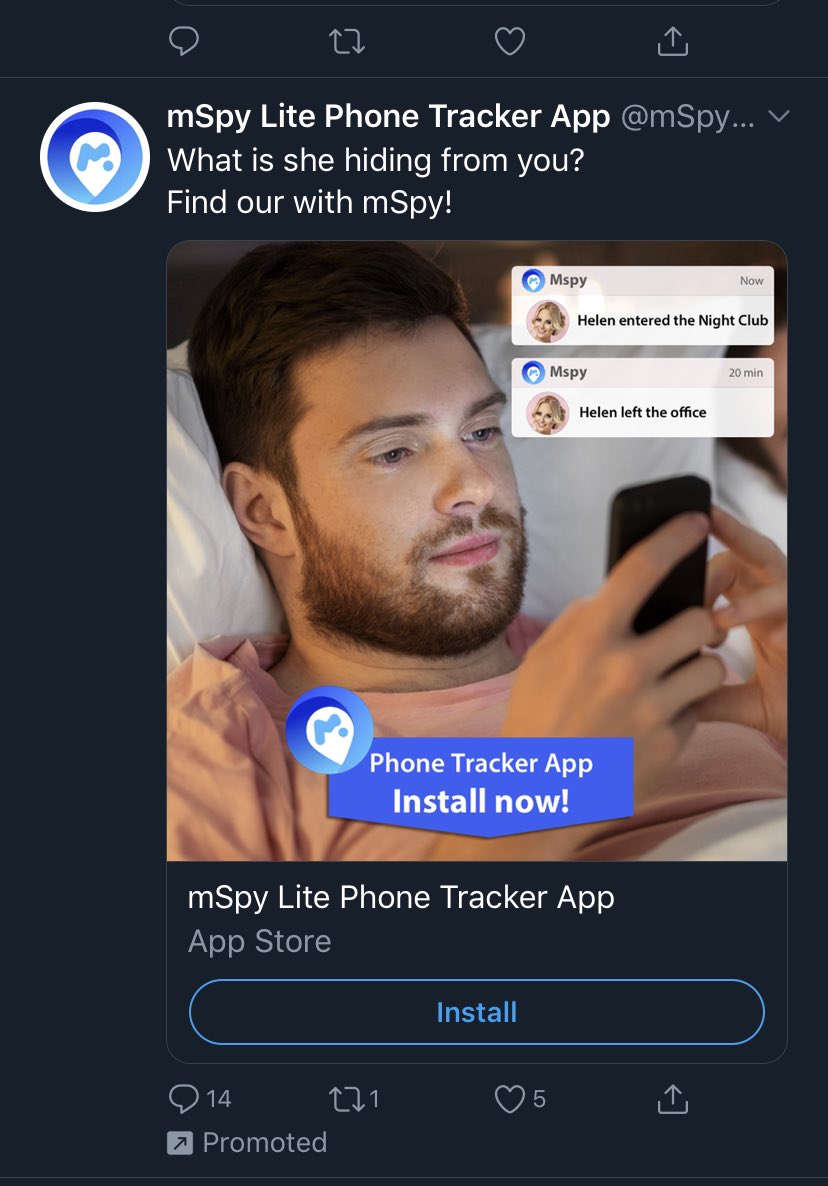 Could I have Stalkerware on my iPhone?

A lot of stalkerware victims assume that it would take a skilled hacker to install a spy app on their iPhone. But in fact, these apps require practically zero technical skills to install, just a window of opportunity to tamper with the victim’s handset. This is something easily possible for most domestic stalkers. For example, a lot of couples know their partners PIN code and when the phone will be unattended.

Stalkerware is a growing industry and the companies behind these malicious apps have gone to great lengths to ensure their products are stalker-friendly and easy to use. So much so, that it typically takes under 3 minutes for these apps to be installed, allowing the stalker to remotely monitor the entire device. Most stalkerware apps even provide instructions on how to make their apps completely invisible, so victims have very little chance of detecting it.

Apps that facilitate stalking can even be found on the official App Store, such as Glympse. These legitimate apps have the capability to track the location of a victim’s device and are designed with families or groups of friends in mind. Be it a parent wanting to know where their child is or a group of friends looking to share their locations while out and about. However, they can easily be abused by stalkers who install them without their target’s knowledge.

How to scan an iPhone for Stalkerware?

Many victims of stalkerware are completely unaware that their devices are being monitored. Often the first signs of foul play may be that someone knows where they’ve been, who they’ve spoken to and details of their most private conversations.

Those concerned about stalkerware on their iPhone will most likely head over to the App Store to find an anti-virus app to check their phone. However, you’ll find that these apps simply don’t exist, since Apple doesn’t allow these type of security apps.

That’s where Certo comes in, makers of the only and spyware detection tool for iPhones. Certo AntiSpy takes a unique approach to iPhone security and can perform a full security scan of an iPhone to uncover even the most advanced stalkerware applications.

Learn more about Certo AntiSpy and see why thousands of people use it to combat stalkerware and secure their mobile world.

Think your iPhone is hacked?

Quickly and easily check your iPhone for stalkerware today with the award-winning Certo AntiSpy.

How To Fix A Hacked Android Phone

If you are dealing with a hacked Android phone, there are some steps you can follow to fix it. These steps are quite simple to follow, so...

How to Remove a Hacker from Your Samsung Phone

Samsung is the second most popular manufacturer of smartphones in the world, with a market share of 28.19% compared to Apple’s 28.43% as...